“The sea inscribed our history on a palimpsest of sand | then erased it.”

Frances Spurrier’s work has been widely published and anthologized, most recently in The Poet’s Quest for God (Eyewear, 2016) and the Mary Evans Picture Library. Publication credits for essays, interviews and poetry include New English Review, Wales Arts Review, The Interpreter’s House, Tears in the Fence, Staple and  South. Her first poetry collection The Pilgrim’s Trail (2014) won the Cinnamon Press Collection Award.  Her interests lie in the area of the connections between language, spirit and the environment. Frances blogs at https://wordpress.com/view/volatilerune.blog

Start with a definition of ‘narrative’.  The Oxford Dictionary has a spoken or written account of connected events. The very word ‘account’ makes me think of someone poring over ledgers in an office rather than a piece of writing or artwork. What about a mathematical account of events?  Yet we tend to think of narrative in terms of beginnings, middles and ends.  A piece of prose or fiction where something happens that we hopefully understand; there will be a resolution of sorts at the end.

It is possible to argue the toss all day about which poems offer narratives meaningful for the reader and how and why;  the relationship between language and meaning, text and meaning, language and gender, language and film – whole academic conferences are given over to the study of these topics.  The question for the poet is how the poem moves this study forward.  In an essay by John Shoptaw which appeared in Poetry (January, 2016) entitled ‘Why Ecopoetry?’, the author quotes Archibald Macleish – a poem should not mean but be [1]

If a poem does not need to mean but simply be then it may or may not contain narrative in terms of our painted account of connected events.  Assuming a connection between narrative and meaning – which someone will no doubt tell me I am not entitled to make – without narrative, without the comfort of some kind of  beginning, middle or end (other than the most obvious one that afflicts humanity) we are at once cast adrift in a sea of existential worries, excluded by fear of an empty space.  We need something poem-like in order to feel the first beginnings of a narrative. But as well as containing a narrative of its own,  poetry, like storytelling, reflects the narratives that we tell ourselves about the societies in which we live, and the planet itself.   The question is can it also chip away at those narratives, in terms of affecting negative belief systems?

White birds over the grey river

Scarlet flowers on the green hills

I watch the Spring go by and wonder

Discounting the title, 25 words. The mind fills in the birds over the grey river, the flowers and hills. Most of us are fortunate enough to know what those things look like.  The mind supplies the narrator too – a woman or a man – in the form of ourselves.  However lovely the scene of the birds on the river to this person it brings no joy.  Here thoughts turn to other places which are longed for, perhaps more beautiful, perhaps less so. Well, so far narrative is easy.  First yearn for home (remarkably it is not difficult to do this even sitting on your own sofa in whatever space you are fortunate enough to possess on this planet).  Next buy a thin volume of the Chinese poets who understood the connection between the human spirit and the natural world instinctively.  Then – even though there may be no white birds currently within your environment – feel free to weep because this is a loss you understand.

The Chinese poets are masters of the art of making us cry. Compare the above with this extract from Ou Yang Hsiu, ‘An Answer to Ting Yuan Ch’en’:

All night you can hear

the sad cries of the wild geese.

The start point of all narrative is our connectedness with all life on the planet.  This is why when the wild geese cry Ou Yang Hsiu thinks of home.

Satish Kumar says: “We are Nature. We are made of earth, air, fire, water, space, time consciousness and imagination. Without the sun or the moon we cannot be…  We are a miniature universe: microcosm of the macrocosm.” [4]

Humans cannot thrive where their environment does not. Global climate change has already had observable effects on the environment. Glaciers have shrunk, ice on rivers and lakes is breaking up earlier; species extinctions are occurring on an unprecedented scale.  A brief glimpse of the statistics on the NASA website should silence even the most determined climate cynic. [https://climate.nasa.gov/] 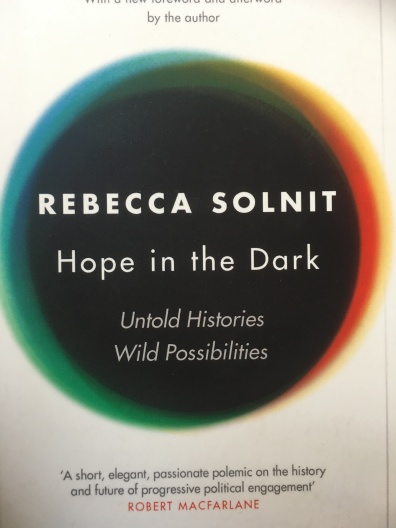 We have become separated in consciousness from the source of our belonging, living in a time of environmental degradation and loss which we ourselves have caused.   Writers and artists – long the advance guard on representations of the natural world and man’s place in it – seem to be fending off the influence of the increasing sense of powerlessness and nihilism which dominates political culture.  The 20th century was a world shaped by war and economic expedience.  The 21st century will perhaps be shaped by humanity’s inability to share. But it does not have to be this way.  We are still only 17 years into the century.

Hope will be the commodity of the future.  As Rebecca Solnit says, you can find hope in surprising corners. [5] For poets, for all of us, the environmental crisis is now the most important narrative of all – everything else is just white noise.